Raven-Symoné Christina Pearman (b. 1985) became famous at the age of four as Olivia Kendall on The Cosby Show, filling the show's cute-toddler gap as actress Keshia Knight Pulliam (Rudy Huxtable) aged out of that role. Later she played Nicole Lee on Hangin' with Mr. Cooper from 1993 to 1997. As a teenager, she starred on the popular Disney Channel series That's So Raven which ran from 2002 to 2006, and was a member of the Cheetah Girls. Choosing to be credited simply as Raven around the time of That's So Raven, she later decided to reinstate the "Symoné."

Raven played Charisse Dolittle in the Creature Shop film Dr. Dolittle (and its two non-Henson sequels). Her other credits include the sitcom State of Georgia and the animated series Kim Possible (as Monique). 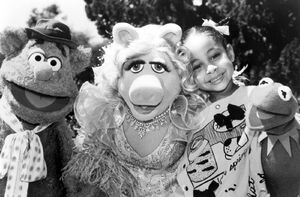 Wikipedia has an article related to:
Raven-Symoné
Retrieved from "https://muppet.fandom.com/wiki/Raven-Symoné?oldid=1328537"
Community content is available under CC-BY-SA unless otherwise noted.