Reuben Figueroa (b. 1958) is a former child actor who played Alan Arkin's son in the 1969 film Popi. Two years later, he appeared on Sesame Street as a kid named Rafael in Episode 0202.

Figueroa's other credits include the film Who Says I Can't Ride a Rainbow! (with Morgan Freeman) and starring roles in two ABC Afterschool Specials, "Santiago's Ark" (with Carla Pinza) and the sequel "Santiago's America." 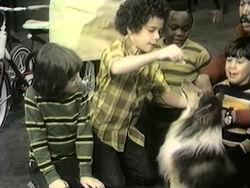 Episode 0202
Add a photo to this gallery
Retrieved from "https://muppet.fandom.com/wiki/Reuben_Figueroa?oldid=1238357"
Community content is available under CC-BY-SA unless otherwise noted.