Richard Hunt (August 17, 1951[1] - January 7, 1992) was a longtime Muppet performer who is known for his many characters, his accomplished singing voice, and his warm backstage personality. Hunt brought many popular characters to life, including Scooter, Beaker, Janice, Statler, Sweetums, Junior Gorg, Don Music and Forgetful Jones.

Hunt was born in New York City, the second of five children and the first of two sons. The family eventually moved to Closter, New Jersey some years later.

Because everyone in his family had worked in show business at some point, Hunt always felt he'd end up in entertainment, too. While in middle school and high school, he put on puppet shows for local children, and he was a fan of the then-fledgling Muppets from a young age. "I'd drop anything to watch them," he said, "I thought they were weird."[2]

After high school graduation and a four-month stint of doing weather reports at a local radio station, Hunt had his first inkling that he might join the Muppets. Hunt's mother, Jane, recalled Hunt's first meeting with Jim Henson:

“Richard had been watching Sesame Street, and he realized there might be an opportunity there. So he went to a phone booth, called Henson Associates, and asked them, cold, if they were hiring puppeteers. Amazingly, Jim was auditioning people that very day. So Richard went right over to 67th Street. He was ushered into a room, and there were Frank and Jim and Jerry and a box full of puppets. "They threw a puppet at me and said sit down," Richard later reported to me. "It was incredible. We just all talked together! We knew right away we had the same sense of humor... And I think they liked me!"[3]”

His first project was The Great Santa Claus Switch in 1970, along with Fran Brill. A few weeks later, he was invited to be in a workshop production. The newcomer was so good, Henson asked him to work a Muppet appearance on The Ed Sullivan Show. Again he scored high marks, and in June 1972, Richard Hunt was hired full-time on Sesame Street.

Hunt first worked on Sesame Street as a background puppeteer, assisting other performers with characters (manipulating the right hands of certain characters, and performing the back half of Mr. Snuffleupagus) or performing characters to pre-recorded tracks. Hunt gradually became one of the main Muppeteers, performing such characters as Sully, Gladys the Cow, Don Music, and Forgetful Jones. He also appeared in the flesh on Episode 1576 as Cedrick the birdwatcher, alongside Madeline Kahn.

Although a main performer on the show, none of Richard Hunt's Sesame Street characters became major characters in the same way as Big Bird, Cookie Monster, and Elmo (who Hunt actually performed as a minor character during the 1984 taping season). Even after he was established as one of the major performers, Hunt participated in Sesame Street productions (such as Christmas Eve on Sesame Street and Don't Eat the Pictures) where he didn't perform character voices.

Richard Hunt served as a mentor to newer puppeteers. When a new puppeteer joined the Sesame set, Hunt was the first to haze and initiate them into the group. Despite this, he always took new puppeteers to lunch, as well as anyone on the set who wanted to join him. [cite] He was known to often read the newspaper as he was performing a character and doing that character's lines.

Richard Hunt was one of the main performers on The Muppet Show, and one of five regular performers on all five seasons. His main character was Scooter, but he also performed Beaker, Statler, Janice, and Sweetums. During the first season, he shared the role of Miss Piggy with Frank Oz, but by the end of the first season, Piggy became Oz's main character, and Hunt no longer performed her.

Richard Hunt has also been noted for his fine singing voice. As Scooter, he sang such songs as "Six String Orchestra" and "There's a New Sound." He also performed Wayne, who was part of the singing duo Wayne and Wanda, and though the two stopped appearing after the second season, Wayne eventually came back to make solo appearances every now and then, singing such songs as "Catch a Falling Star" and "For Me and Gargoyle." Despite Hunt's singing voice and the fact that Janice was a musician, Janice seldom sang lead vocals in songs. She did have two major lead-singing performances, singing "With a Little Help From My Friends" and "Rockin' Robin."

In the 1981 book Of Muppets and Men, Christopher Finch described Hunt's endless energy and humor. "He seems to get more unadulterated pleasure from performing than anyone else in the organization," Finch wrote. "When he is not working on camera, he is apt to have Scooter or Beaker or Janice -- anyone -- on his arm for the purpose of entertaining visitors to the studio. If there are no visitors around, he will attempt to entertain his co-workers... Like Jerry Nelson, he is a versatile on-camera performer, but his importance to the show derives also from his off-camera personality. He makes the crew laugh, jokes with the guest star, clowns for the shop personnel. He is one of the chief reasons for the loose atmosphere that exists around Studio D despite the pressure and the slow pace that are endemic to television production."

On Fraggle Rock, Richard Hunt had two major characters, Junior Gorg and Gunge. He also performed many minor and one-shot guest characters, and he originally performed The Storyteller Fraggle (before Terry Angus took over). Richard Hunt was most involved with the show during its first season, since unlike Sprocket or the main five Fraggles, his characters weren't needed for every (or almost every) episode. After that season, as the background performers began to do more character voices on the show, Hunt performed less frequently on the series, spending his extra time on Sesame Street. According to Terry Angus, "After the first season, Richard didn't come in as much, because his characters weren't really called for that often and all of us Canadians were given a chance to do characters every now and then which gave Richard an easier time of it. Plus, he was going down to work on Sesame Street."[5]

Richard Hunt also assisted in the audition process for background puppeteers on Fraggle Rock.[6] He made his directorial debut with the fifth season episode "The Honk of Honks." He also made a cameo as himself ("The Boss" director) in Fraggles Look for Jobs, the show's wrap tape.

Additionally, the two performers shared the role of the Two-Headed Monster. They also play the children in the Twiddlebug family with Hunt performing the son, Timmy Twiddlebug, and Nelson performing the daughter, Tina Twiddlebug. Another notable team-up included Hunt's role as Gunge, normally paired with Marjory the Trash Heap (a Nelson character), in addition to Dave Goelz's Philo character. Both performers had characters named after them in the band Little Jerry and the Monotones, with Hunt performing Rockin' Richard alongside Nelson's Little Jerry.

“Richard came into the company when he was pretty young, and I kind-of took Richard under my wing, when he first came in, since Frank and Jim were sort-of a team and I was like a straight man or foil that worked off their characters. So when Richard came in, we got to a point where we would work really well together. When one of us would start to go somewhere, the other would know what was happening.[7]”

During the late 1980s, Richard Hunt was still active in new productions and performing new characters. He performed Tug Monster on the short-lived Little Muppet Monsters series, and The Wild Impresario on the short-lived Ghost of Faffner Hall. In specials, he performed Lugsy in The Tale of the Bunny Picnic and Belmont in The Christmas Toy.

Hunt has also occasionally appeared on-screen in movies and television productions. He made an on-screen cameo as a taxi driver in The Great Muppet Caper, he played the role of Wilson in Trading Places (which also featured fellow Muppeteer Frank Oz), and he played the role of Larry in Oxford Blues. He also played the role of Del in Jim Henson's failed pilot Puppetman. He also spent an hour entertaining the audience during the taping of The Fantastic Miss Piggy Show.[8] In addition to directing the aforementioned Fraggle Rock episode, Richard Hunt also directed the 1988 direct-to-video production Sing-Along, Dance-Along, Do-Along. He also directed several Muppet inserts for Sesame Street during season 17, receiving onscreen credit as a segment director in the videos Elmo's Sing-Along Guessing Game and The Best of Elmo.

In the period immediately following his death, few of Hunt's characters (with the notable exceptions of Beaker, Statler, and Sweetums) were recast with new performers. Scooter was retired and absent as a character in all Muppet productions until Muppets from Space. On Sesame Street, characters originated by Hunt have usually appeared in background cameos, though over time, some (such as Gladys the Cow) have been gradually recast and made recurring appearances. By the 2000s, most of Hunt's main Muppet Show characters were inherited by other major performers like Steve Whitmire and David Rudman.

According to his page on FindAGrave.com, Hunt was cremated. Some ashes were spread into the flower garden at the Hunt family home in New Jersey.[9] Many panels were created in his honor for the NAMES Project AIDS Quilt, including one created by his friends in The Muppet Workshop.

Jon Stone, former director of Sesame Street, said this at the time of Hunt's death:

“It’s impossible to imagine a world without Richard. He came to us a wide-eyed eighteen year old and grew into a master puppeteer and inspired teacher. No one ever had a more manic love of the outrageous and absurd; no one could ever make me laugh the way Richard could. A generation has grown up absorbing Richard’s art, and I have to believe that every one of them is a smarter, funnier, stronger, sillier, more generous person because of him.[10]” 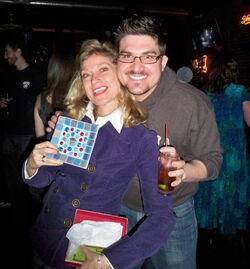 has been annually presented at the Sesame Street wrap party to the cast member who best honors the generosity in spirit and dedicated work of Richard Hunt in their actions on set. The 2010 winner was Leslie Carrara-Rudolph.