Notable events during Nixon's presidency included continued escalation and the ultimate end of the Vietnam War, a 1972 trip to China which opened diplomatic relations with the US, the Apollo 11 moon landing, and the debut of a children's show known as Sesame Street.

In 1959, during the Emmy Awards (which were held at Washington, D.C.), guest of honor Nixon (then Vice President to Dwight D. Eisenhower) met with Jim Henson, winner of the Emmy for Best Local Entertainment.[1] According to Jane Henson, Nixon's only comment of note was "I knew someone in the Navy with a beard."[2]

“The many children and families now benefiting from Sesame Street are participants in one of the most promising experiments in the history of that medium. The Children's Television Workshop certainly deserves the high praise it has been getting from young and old alike in every corner of the nation. This administration is enthusiastically committed to opening up opportunities for every youngster, particularly during his first five years of life, and is pleased to be among the sponsors of your distinguished program.
Sincerely,
Richard Nixon”

Members of Nixon's cabinet and staff included Vice-President Gerald Ford (1973-1974), Secretary of State Henry Kissinger (1973-1977), and speechwriters Ben Stein and David Gergen. His infamous "enemies list" included Paul Newman in the original 20-name memo, while the expanded master list named Carol Channing, Shirley Chisholm, Bill Cosby, Jane Fonda, John Lennon, Joe Namath, Gregory Peck, Tony Randall, and Barbra Streisand. Even the name "Lloyd N. Morrisett" (that of one of the founders of the Children's Television Workshop and chairman from 1968 through 2000) appeared, although why the name was there, and whether it referred to Morrisett or his namesake father (an educator), remained a puzzle to Morrisett.[4] 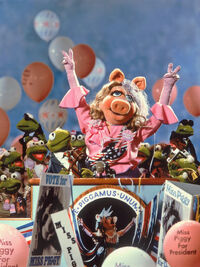 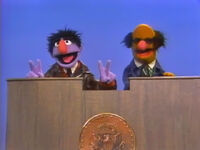 Biff flashes the V when he imagines running for president
"We Coulda" song, Sesame Street 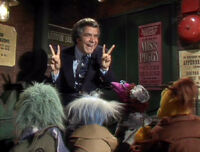 Rich Little on The Muppet Show

Wikipedia has an article related to:
Richard Nixon
Community content is available under CC-BY-SA unless otherwise noted.
Advertisement