Richie Rich and Jackie Jokers was a comic book series by Harvey Comics, pairing their "poor little rich boy" Richie Rich with child comedian Jackie Jokers and running from 1973 to 1982. The two sometimes appeared together, while in other stories, Jackie Jokers starred in spoofs of movies and TV shows.

Issue 27 (June 1978) featured a "Jackie Jokers TV Special": "Sez-a-Who Street," a Sesame Street parody with a supporting cast of Moopets (no relation). Jackie, in a bird suit, plays Medium Bird. He is joined by Ert and Bernie (Bert and Ernie), Hermit the Frog (Kermit, mostly seen in reporter garb), and the Comic Book Monster (Cookie Monster) who eats comic books. He eats a Casper comic but turns down Richie Rich ("Me can't eat rich food!")

Groover Grouch (Oscar the Grouch only blue) gives Medium Bird a tour of the inside of his trash can, revealing what looks like the lavish interior of a luxurious mansion. The parody ends with all of the characters running in panic because the Comic Book Monster has realized that they are *in* a comic book. They all fly away while the monster devours a page of a different Jackie Jokers/Richie Rich story. 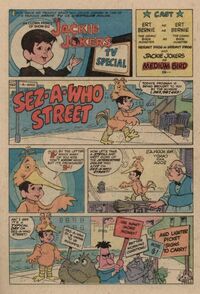 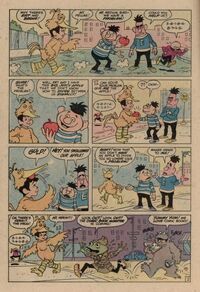 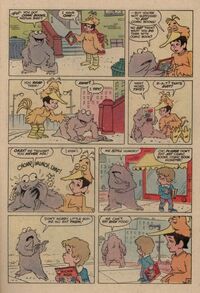 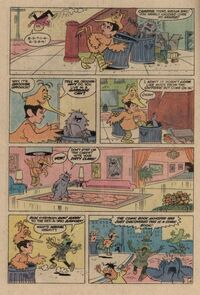 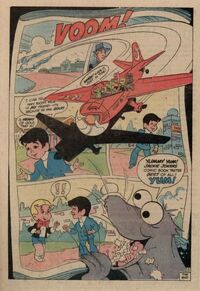 Retrieved from "https://muppet.fandom.com/wiki/Richie_Rich_and_Jackie_Jokers?oldid=1198169"
Community content is available under CC-BY-SA unless otherwise noted.