On November 5, 2009, Elmo appeared as a special guest with Gervais during a show at Carnegie Hall to sing "New York, New York."[1]

Elmo visited Gervais' office on a trip to London in 2010, where he also met with Warwick Davis in a viral video.

The actor was set to make a cameo in The Muppets, as he confirmed on his blog, "You may have heard I'm doing a cameo in the new Muppet movie. Should be a laugh. I'm in L.A. anyway for the Globes, so... convenient. Hope my mate Elmo is around that day." Despite that his scenes were cut from the final film, Gervais later confirmed in December 2012 that he'll be starring as one of the human leads, Dominic Badguy, in the film's sequel Muppets Most Wanted. 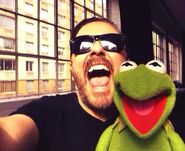 Wikipedia has an article related to:
Ricky Gervais
Retrieved from "https://muppet.fandom.com/wiki/Ricky_Gervais?oldid=733435"
Community content is available under CC-BY-SA unless otherwise noted.