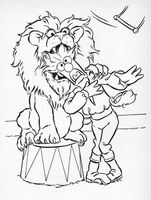 Wikipedia has an article related to:
Ringling Bros. and Barnum & Bailey Circus
Retrieved from "https://muppet.fandom.com/wiki/Ringling_Bros._and_Barnum_%26_Bailey_Circus?oldid=477134"
Community content is available under CC-BY-SA unless otherwise noted.