Ripples is a one minute film created by Jim Henson for "Expo67" in Montreal, Canada in 1967.

In this dialogue-free short, an architect (played by Jon Stone) toys restlessly with a lump of sugar in his coffee. The ripples dissolve to ripples of water, as the man drop pebbles. Images of the man's life, family, great architecture, and religious symbolism flit by over a soundtrack by Raymond Scott, utilizing electric sounds to create a stream-of consciousness effect.

A similar approach to both sound and visuals was used in another 1967 Henson short, Wheels That Go. 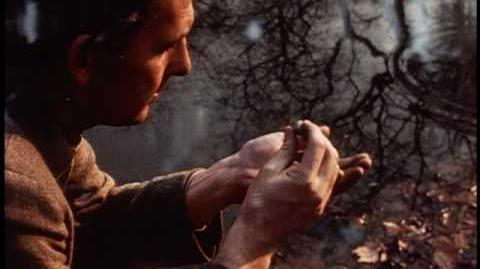 Ripples - Jim Henson
Add a photo to this gallery
Retrieved from "https://muppet.fandom.com/wiki/Ripples?oldid=1099110"
Community content is available under CC-BY-SA unless otherwise noted.