Although beginning the series at 14, Robbie celebrates his fifteenth birthday in the first season episode "The Howling". Intelligent but conflicted, Robbie is frequently torn between teenage hormones and general rebellion and more specific questioning of such institutions as Hurling Day or the general motives of WESAYSO and the Chief Elder.

He can be protective and caring towards his younger siblings. Despite the petty squabbles he has with Charlene, he tried to help her when she was arrested and put on trial for "heresy" (saying the world is round and not flat) in "Charlene's Flat World".

At his best, he's quite rational and level-headed. One such example would be in "The Greatest Story Ever Sold", during which he was the only one to realize that "potato-ism" was only trying to prevent people from thinking for themselves.

He has been shown to be very clever. In "Power Erupts", he built a prototype for an infinitely renewable energy source to submit to the science fair.

Despite being down-to-earth, he does have his share of reckless decisions. He has followed Spike's questionable advice, such as peeing on Caroline Foxworth's lawn in "How to Pick Up Girls". In "Steroids to Heaven", he resorts to eating Thornoids to become more musclebound so he can get Caroline to notice him and ends up gaining a huge ego. However, in the end, he learns that he doesn't need to bulk up to get Caroline's attention. 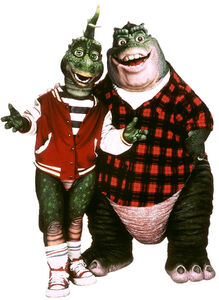 Son and father
Community content is available under CC-BY-SA unless otherwise noted.
Advertisement