Robert De Niro (b. 1943) is an Academy Award-winning actor. He has appeared on Sesame Street in a spot with Elmo in which De Niro displays his acting abilities for Elmo by imagining himself as a Muppet dog, cabbage, and a copy of Elmo. (First: Episode 3978)

He also introduced The Muppets' Wizard of Oz when it premiered at the Tribeca Film Festival in New York City.

When De Niro hosted Saturday Night Live in December 2004, Kermit the Frog appeared during his opening monologue and coerced him into singing a duet of "Have Yourself a Merry Little Christmas." When Kermit mistakenly sang the line "Make the yuletide gay" in the first verse instead of second, De Niro, following the teleprompter, correctly sang the non-rhyming "From now on, our troubles will be out of sight." Although the error was Kermit's, a witty consolation from the frog made it look like the mistake was De Niro's and elicited a laugh from the live studio audience. The second verse was sung without any mistakes.

Kermit spoofed De Niro in the 1998 calendar Muppet Movie Parodies: Plump Fiction, in "Raging Bullfrog," and again with a Muppet Celebrity T-shirt dropping a nod to his Taxi Driver character. 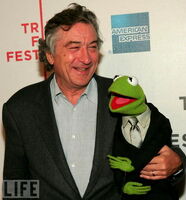 De Niro and Kermit at the 2005 Muppets' Wizard of Oz premiere.

De Niro with the Muppet gang at the Oz premiere. 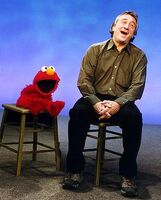 Wikipedia has an article related to:
Robert De Niro
Community content is available under CC-BY-SA unless otherwise noted.
Advertisement