MacNeil made his first guest appearances on Sesame Street in 1984, interviewing Oscar the Grouch about his ice cream business in one segment (excerpted in Sesame Street Unpaved), and interviewed Big Bird and Telly about the word "abierto" in another.

Four years later, MacNeil appeared in Sesame Street, Special, interviewing Cookie Monster and Kermit the Frog on the "Cookiegate" scandal. MacNeil also had cameos in the celebrity versions of "Monster in the Mirror" and "Put Down the Duckie."

After his retirement from NewsHour in 1995, MacNeil appeared once more on Sesame Street in Episode 3740 as a special correspondent to Kermit the Frog. He covered the first WASA landing on the moon for Sesame Street News, much to Kermit's chagrin. 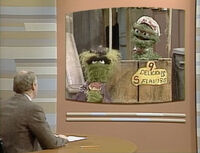 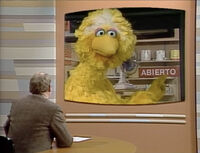 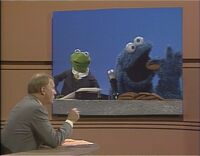 Wikipedia has an article related to:
Robert MacNeil
Retrieved from "https://muppet.fandom.com/wiki/Robert_MacNeil?oldid=1249449"
Community content is available under CC-BY-SA unless otherwise noted.