Robin Gibb (1949-2012) was a singer and songwriter who, with brothers Barry and Maurice, formed the group The Bee Gees, becoming an influential part of the disco era.

Gibb personally helped usher Sesame Street into the world of glittering balls and Grover impersonating John Travolta, by serving as guest vocalist on the album Sesame Street Fever. On that album, he performed the song "Trash" and sang the lead vocal on the title track "Sesame Street Fever," as well as talking to Cookie Monster during the intro to the disco version of "C is for Cookie."

The Bee Gees song "Stayin' Alive" was later performed on The Muppet Show. 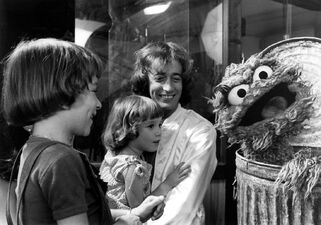 Robin Gibb and his children visit Oscar the Grouch 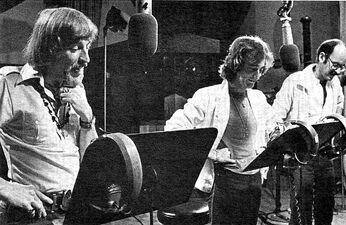 Wikipedia has an article related to:
Robin Gibb
Retrieved from "https://muppet.fandom.com/wiki/Robin_Gibb?oldid=1075538"
Community content is available under CC-BY-SA unless otherwise noted.