Robin Roberts (b. 1960) is an American broadcaster best known for her role as a long time anchor on Good Morning America, starting out as news anchor in 2002 and being promoted to co-anchor in 2005. Roberts has also worked for ESPN, and was the offical pace-car driver for the 2010 Indianapolis 500.

Roberts, along with Elmo, was the host of the 2010 Annual Sesame Workshop Benefit Gala. 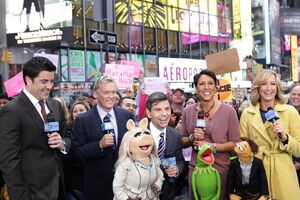 Wikipedia has an article related to:
Robin Roberts (newscaster)
Retrieved from "https://muppet.fandom.com/wiki/Robin_Roberts?oldid=1075541"
Community content is available under CC-BY-SA unless otherwise noted.