Robin Williams (1951-2014) was an actor and comedian who first became famous as the star of the TV show Mork & Mindy. That series also helped make his mark as a hailed master of improvisational comedy, whom writers of various productions learned it was often best to accommodate him considering his off-the-cuff humor was often better than their more carefully prepared material.

He later became known for his starring roles in the films Good Morning, Vietnam, Dead Poets Society, Mrs. Doubtfire and Good Will Hunting, for which he won an Academy Award for Best Supporting Actor. He was also well-known for voicing the Genie in Disney's Aladdin and its sequel, Aladdin and the King of Thieves.

However, he later got to appear with the Muppets in the Winter 1983 issue of Muppet Magazine where he was interviewed by Kermit the Frog. He also appeared in the Spring 1986 issue to receive an Honorary Muppet Award. 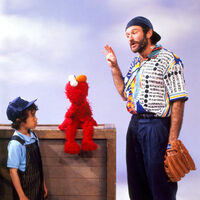 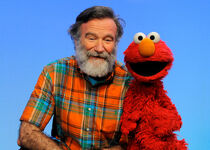 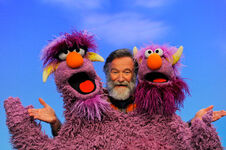 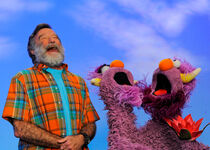 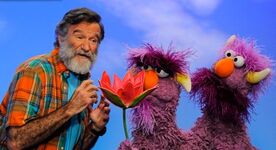 Wikipedia has an article related to:
Robin Williams
Retrieved from "https://muppet.fandom.com/wiki/Robin_Williams?oldid=1250562"
Community content is available under CC-BY-SA unless otherwise noted.