Rocky is Sam's cat in the Sesame Street direct-to-video release, Getting Ready to Read. Rocky speaks only in meows to communicate to Sam that he's hungry.

The puppet has appeared in various segments on Sesame Street since the early 1980s, including "Quiet Time Song", "I Get There" (performed by Richard Hunt), "Do-Op Hop," "Italian Street Song", "C Drives Me Crazy", a segment with Marshal Grover and Fred the Wonder Horse, as Sally Sanchez's cat, and as Lady Agatha's missing cat in a Mysterious Theater sketch (performed by David Rudman). The puppet appeared with eyelashes as Simba, and later in an original segment created for Bert & Ernie's Word Play with different color eyelids where the cat meows and dances along with Rosita and Zoe to "Sticky Tape".

The cat also appears in the Fall 1984 issue of Muppet Magazine, pictured in a spread with three dogs named "Mutt." 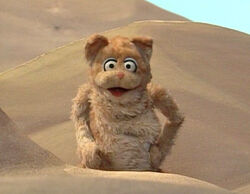 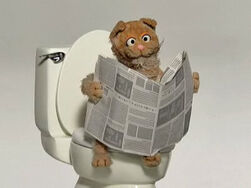 A "kitty cat sitting on the potty" from sesamestreet.org, played by Joey Mazzarino
Add a photo to this gallery
Retrieved from "https://muppet.fandom.com/wiki/Rocky_(cat)?oldid=1203315"
Community content is available under CC-BY-SA unless otherwise noted.