Rosebud is a dog-like Muppet monster who appears in Fozzie's Big Book of Sidesplitting Jokes.

Structured after a typical canine, Rosebud sports blue fur covered in dark yellow spots, sharp teeth and claws, and patches of thick hair at the end of its tail, around its neck like a mane, and under its nose akin to a mustache. Despite the color coating, Rosebud appears to be an entirely different breed than Lamont, another blue Muppet dog.

A companion of Mean Mama, Rosebud encounters Fozzie Bear as he makes his way through the park rattling off some jokes out loud. Fozzie earns the derision of the monster pair following a joke about how a dog dresses in different seasons. In response, Mean Mama commands her accomplice to "sic 'im", chasing Fozzie out of the park.

In contrast to the usual written-out representation of a dog's bark — commonly "woof" or "arf" — Rosebud's animal call is presented as "Naf! Naf!", suggesting an altogether different sound from its species. 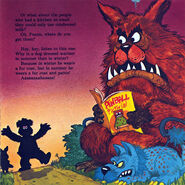 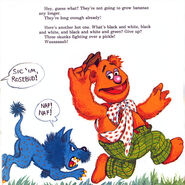