Sônia Braga (b. 1950) is a Brazilian actress who played teacher Ana Maria on Vila Sésamo. In 1973, for her work on the series, she received a Helene Silveira Trophy for best TV actress.[1]

Braga later gained fame in the United States, starring with Raul Julia in Kiss of the Spider Woman, and appearing in such varied television series as American Family, The Cosby Show, Sex and the City, Alias (as Elena Derevko), and Law & Order. 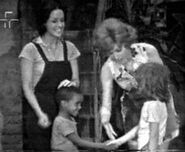 Sônia Braga, left, on Vila Sésamo
Add a photo to this gallery

Wikipedia has an article related to:
Sônia Braga
Retrieved from "https://muppet.fandom.com/wiki/S%C3%B4nia_Braga?oldid=1077021"
Community content is available under CC-BY-SA unless otherwise noted.