Sabine Falkenberg (b. 1966) is a German puppeteer and voice actress who performed Tiffy on Sesamstrasse and has also dubbed the voice of Elmo from 2000 to 2012 (prior to assuming the role full-time, she also performed the character's voice in 1993's Silvester auf der Sesamstrasse). She inherited Tiffy from puppeteers Kerstin Siebmann-Röders and Marita Stolze, respectively, until the character was retired after 27 years on the show in 2005.

Falkenberg's other credits include narrating German audio books and assorted film dubbing work, including the character of Laura Palmer on Twin Peaks, actress Mia Sara in Time Cop, and minor guest roles on Lost. Since departing as a puppeteer on Sesamstrasse, Falkenberg has been increasingly active as an on-camera performer, with guest parts on various German TV shows (including Tatort). 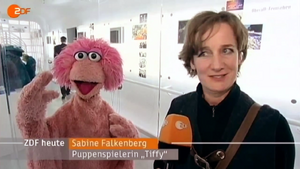 Retrieved from "https://muppet.fandom.com/wiki/Sabine_Falkenberg?oldid=1376945"
Community content is available under CC-BY-SA unless otherwise noted.