Saint Patrick's Day is a holiday held on March 17th to commemorate the death of Ireland's patron saint.

A number of St. Patrick's Day parades have feature Muppet floats and balloons including Jackson, Mississippi in 2010, Toronto, Canada in 2012, and Syracuse, NY in 2014.

Kermit the Frog appeared on The Tonight Show starring Jimmy Fallon on Saint Patrick's Day 2014 and sang "Bein' Green" with Fallon. Fallon hinted to Variety that there was a special Saint Patrick's Day skit. "There could be something green happening — wink, wink,” Fallon said.[1] 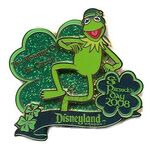 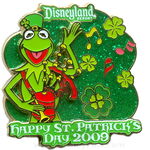 2009 Disneyland pin
Add a photo to this gallery

Wikipedia has an article related to:
Saint Patrick's Day
Retrieved from "https://muppet.fandom.com/wiki/Saint_Patrick%27s_Day?oldid=1154237"
Community content is available under CC-BY-SA unless otherwise noted.