Sally Messy Yuckyael is a Grouch who hosts a talk show of the same name. She is a parody of talk show host Sally Jessy Raphael. She appeared on Sesame Street in Season 24 and Season 27.

Sally's show allows Grouches to vent their problems (and get hissed at by the equally grouchy audience). Needless to say, she's not very helpful in comforting her guests (she is a Grouch after all).

Oscar the Grouch is her most frequent guest. Among his reasons for being on the show are taking care of a lost kitten in Episode 3120 and falling in love with Grundgetta in Episode 3519. Other guests include Baby Bear and Goldilocks in episode 3486. 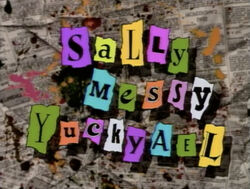 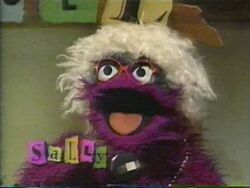 Sally sports a shorter hairdo in her season 27 appearances.
Add a photo to this gallery