Sally Ride (1951-2012) was a physicist and astronaut for NASA. As a member of the STS-7 crew of Space Shuttle Challenger in June 1983, she became the first American woman to go into outer space.

Prior to her flight in space, Ride served as CAPCOM for the second and third Columbia missions, a role designated as the sole point of communication between a space-faring crew and mission control on the ground. In this capacity, she consulted on a series of morning wake-up calls for STS-2 featuring original material with the cast of Pigs in Space. The process of working on the scripts to fine-tune details allowed her to forge a friendship with writers Jerry and Susan Juhl. Following mission success, the relationship garnered the Juhls an invitation to Ride's launch on Challenger.[1]

During the ramp-up to her first flight, Ride's celebrity increased with recognition on magazine covers and warm wishes from other famous individuals; particularly women, and especially women who were trailblazers in their fields. According to her biographer, one such accolade came in the form of a message from Miss Piggy:[2]

During the production of Fraggle Rock, the Juhls invited Ride to visit the set in Toronto. Susan Juhl recalls that Ride had been "fascinated by the Doozers, since the mechanisms used to make them move was very similar to the arm on the Shuttle."[1] Mechanical designer Faz Fazakas also recalled in documentary footage from Fraggle Rock: Complete First Season that Ride practiced with the Doozer Vehicles technology prior to operating the shuttle's robotic arm.

In January of 1984,[3] the year after her first space flight, Ride taped segments for Sesame Street: 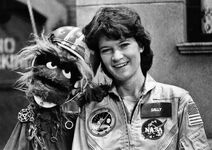 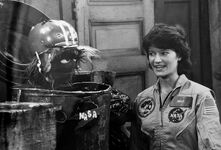 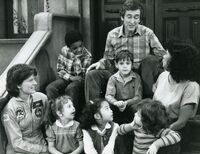 Ride on the stoop of 123 Sesame Street with Bob, Maria, and the Kids.

Wikipedia has an article related to:
Sally Ride
Community content is available under CC-BY-SA unless otherwise noted.
Advertisement