Sam is the neighborhood storekeeper who is continually baffled by the Busby Twins on Sesame Street. The pair shop at his store, but because they speak by splitting syllables between them, Sam jumps the gun (fetching a can instead of a candle, a ham instead of a hammer, and a rock instead of a rocket). He also tends to forget which twin is Moe and which one is Joe.

The character later served the same function opposite Simon Soundman, seeking to buy a saw. He's named for the first time in this sketch, as the owner of Sam's General Store. He brings Simon a hammer, a bell, and a clock, before finally realizing what Simon wants. As Simon leaves, he reminds him that he forgot to "pay" (cash register sound) for his saw, prompting Simon to pay before leaving. 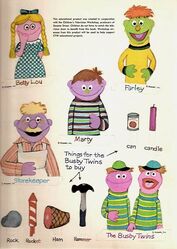 Add a photo to this gallery
Retrieved from "https://muppet.fandom.com/wiki/Sam_(storekeeper)?oldid=1268276"
Community content is available under CC-BY-SA unless otherwise noted.