Sam Rockwell (b. 1968) is an actor who has starred in such films as Confessions of a Dangerous Mind, Safe Men, Heist, and Matchstick Men. Early in his career, in 1990, he appeared as a teenaged thug in the Creature Shop film Teenage Mutant Ninja Turtles. Fifteen years later, he garnered a leading role in another Creature Shop film, playing the cocky, erratic Zaphod Beeblebrox in The Hitchhiker's Guide to the Galaxy (2005). 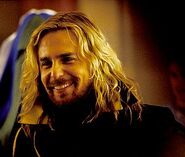 Wikipedia has an article related to:
Sam Rockwell
Retrieved from "https://muppet.fandom.com/wiki/Sam_Rockwell?oldid=1075722"
Community content is available under CC-BY-SA unless otherwise noted.