Sam the Eagle was featured in series 8 of the Jim Henson's Muppets action figure line made by Palisades Toys.

Two Sams were released in series 8: one regular, and one "shifty-eyed" variant with Sam looking to the left. Both Sams came with different books and different stickers for the seal. Sam's tail is a loose piece.

The regular Sam includes a lectern with a magnetic removable circular seal, three Sam Eagle stickers to put on the seal, a miniature copy of U.S. Constitution, and a book titled "Standards and Practices - The code of Ethics and The Standards of Professional Conduct, 118th Edition". Inside the book is the "Nudity" speech from episode 206 and The Muppet Show 2 album.

The shifty-eyed Sam comes with a similar set of accessories, including lecturn, magnetic seal, four Stickers for the seal, a small U.S. Constitution, and a book titled Strategies for the All-American Campaign: Sam the Eagle 2004. The book contains a draft campaign speech, presumably for a 2004 run for President of the United States. 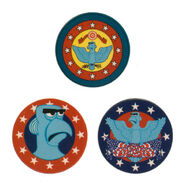 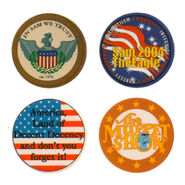 shifty-eyed variant
Add a photo to this gallery
Retrieved from "https://muppet.fandom.com/wiki/Sam_the_Eagle_Action_Figure?oldid=1099433"
Community content is available under CC-BY-SA unless otherwise noted.