Samantha Harris (b. 1973) is an American television personality, best known as the co-host of Dancing with the Stars with Tom Bergeron, now currently working at Entertainment Tonight.

On the season nine finale of Dancing with the Stars (her final episode), Harris appeared backstage with Miss Piggy, where the two fought for domination of the camera, and Harris receiving a karate chop from the pig.

In Sesame Street Season 41 she appears with Elmo to present the word "reporter" in Episode 4233.

Aside from Dancing, Harris has served as a correspondent for E!, covering the Oscars, the Golden Globes, and the Emmy Awards Ceremony, a special correspondent for Good Morning America, hosted The Next Joe Millionaire, guest hosted on The View and Who Wants to Be a Millionaire.

As an actress, she has appeared on CSI: Crime Scene Investigation, Drop Dead Gorgeous, and the feature film George of the Jungle. 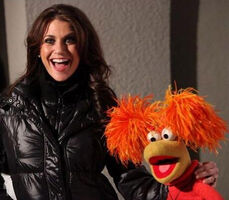 With Red Fraggle at Kitson in 2009 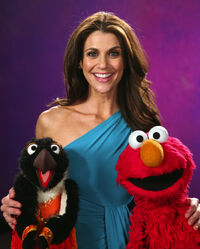 Wikipedia has an article related to:
Samantha Harris
Retrieved from "https://muppet.fandom.com/wiki/Samantha_Harris?oldid=1075731"
Community content is available under CC-BY-SA unless otherwise noted.