Sammy the Snake sings a song about himself, "Sammy the Snake", which was recorded for The Muppet Alphabet Album and later adapted into a Sesame Street insert for Season 3. Sammy was made from a Lavender Anything Muppet.

According to The Sesame Street Dictionary, Sammy is owned by Prairie Dawn.

Another snake character, also called Sammy, was performed by Jim Henson in an appearance with Carol Channing for the song, Hello, Sammy! (to the tune of Carol's signature Broadway hit, Hello, Dolly!). This particular snake puppet was designed and built by Ed Christie, and was used thereafter as a utility snake puppet. He also appeared as "Howard," in the Monsterpiece Theater sketch Howard's End. 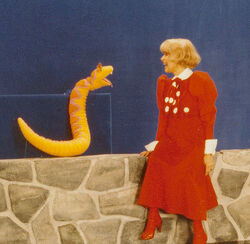 Sammy and Carol Channing.
Add a photo to this gallery

Retrieved from "https://muppet.fandom.com/wiki/Sammy_the_Snake?oldid=1242673"
Community content is available under CC-BY-SA unless otherwise noted.