Samuel L. Jackson (b. 1948) is a film actor, best known for his roles in the films Pulp Fiction, Jurassic Park, Star Wars: Episodes I through III, and Snakes on a Plane.

Jackson contributed a "Spinach Linguine and Ground Turkey Sauce" recipe for Miss Piggy's 1996 cookbook, In the Kitchen with Miss Piggy. In 2015, Jackson posted photos of himself with Miss Piggy and Kermit the Frog to his Facebook page, that were taken during the shooting of a Capital One commercial, co-starring Charles Barkley and Spike Lee. 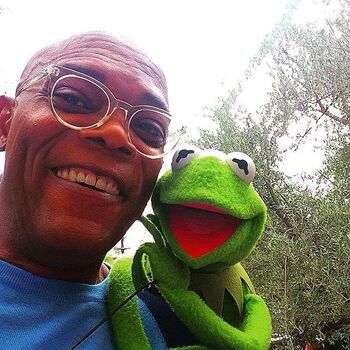 "Working with a Pro today! Awesome!!!" 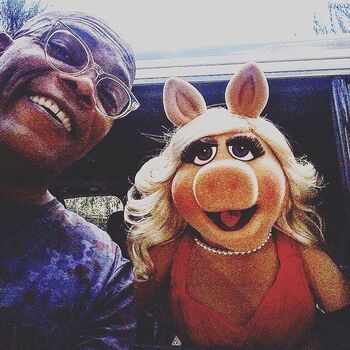 "His Ex was there too!!"
Add a photo to this gallery

Capital One commercial
Add a photo to this gallery

Wikipedia has an article related to:
Samuel L. Jackson
Retrieved from "https://muppet.fandom.com/wiki/Samuel_L._Jackson?oldid=1075739"
Community content is available under CC-BY-SA unless otherwise noted.