Sandra Oh (b. 1971) is an Emmy Award nominated Canadian actress best known for her role as Cristina Yang on Grey's Anatomy and for the feature film Sideways. She appeared in a 2008 episode of Sesame Street as Cookie Monster's "fairy cookie person", and bestows upon him the "cookie touch": whatever he touches will turn into a cookie. After several mishaps, she rescinds the gift.

She also presented the lifetime achievement award to Sesame Street, at the 2009 Daytime Emmy Awards. 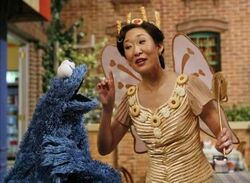 Episode 4184
Add a photo to this gallery

Wikipedia has an article related to:
Sandra Oh
Retrieved from "https://muppet.fandom.com/wiki/Sandra_Oh?oldid=1075745"
Community content is available under CC-BY-SA unless otherwise noted.