"Santa Baby" is a song made famous by Eartha Kitt, and covered by Madonna, as well as other diva pop singers.

Miss Piggy (as Saltine) sings this for the feature number "Moulin Scrooge" in It's a Very Merry Muppet Christmas Movie.

A new version was recorded for the 2006 album A Green and Red Christmas. Piggy sings it again in Lady Gaga & the Muppets' Holiday Spectacular, being continually upstaged by her backup singers (the gospel choir, Youthful Praise).

A plush Miss Piggy by DanDee was released for in 2011 which featured a verse from the song. 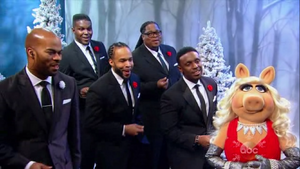 Retrieved from "https://muppet.fandom.com/wiki/Santa_Baby?oldid=1231572"
Community content is available under CC-BY-SA unless otherwise noted.