Saralou Cooper, also credited as Sara Lou Cooper, is an actress who appeared in three of Jim Henson's Numerosity films for Sesame Street (specifically for 2, 3, and 5) and is the only adult woman seen in the films. She had previously appeared in a 1960s La Choy commercial labeled "Kitchen," as a housewife who is terrified by the arrival of Delbert the La Choy Dragon.

Cooper was primarily a New York stage actress, whose known credits include the 1960 Broadway play Greenwillow (with Anthony Perkins), the original cast album of Greenwich Village USA, and the 1975 Off-Broadway Tennessee Williams play Summer and Smoke. One of her few TV credits was in the 1976 American Parade special We the Women, hosted by Mary Tyler Moore (appearing briefly as a Colonial housewife). 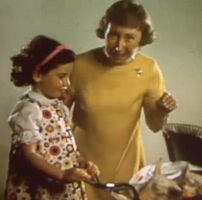 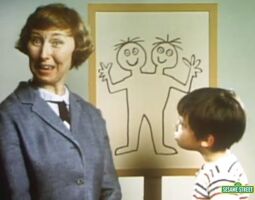 Retrieved from "https://muppet.fandom.com/wiki/Saralou_Cooper?oldid=1075784"
Community content is available under CC-BY-SA unless otherwise noted.