The Schoolroom Busts adorn Ebenezer Scrooge's old one-room public school in The Muppet Christmas Carol. Standing on a rather rickety shelf, the busts are clay portrayals, in Muppet style, of Aristotle, Dante, Moliere, and William Shakespeare.

Gonzo and Rizzo the Rat crouch on this shelf to observe and narrate the action in Scrooge's past. As time passes, and the schoolroom ages and decays, Shakespeare's nose drops off and the entire shelf topples to the ground.

In the blooper reel for the film (seen on the 2002 DVD), Rizzo (Steve Whitmire) and Gonzo (Dave Goelz) are caught between takes fooling around in character, addressing the Shakespeare bust with, "Hey, it's Frank Oz!" 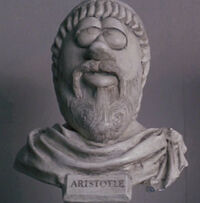 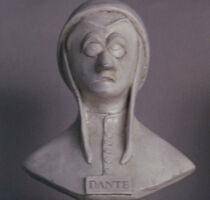 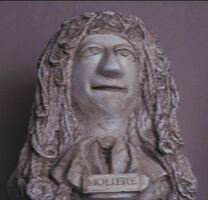 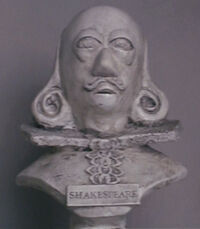 William Shakespeare
Add a photo to this gallery

Retrieved from "https://muppet.fandom.com/wiki/Schoolroom_Busts?oldid=1202344"
Community content is available under CC-BY-SA unless otherwise noted.