Sclrap Flyapp is a sketch featured many times on variety shows. The Sclrap Flyapp alien blows smoke at anyone that doesn't say "Sclrap Flyapp," especially a snail-like alien who prefers to say "merp."

Jim Henson introduced the sketch on The Today Show, reused it on The Tonight Show, and in its best remembered outing, on The Ed Sullivan Show. It was later reworked into the sketch "Hugga Wugga", which was performed on The Muppet Show in episode 118. 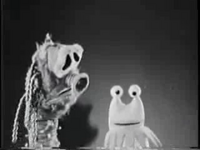 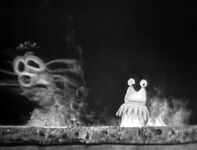 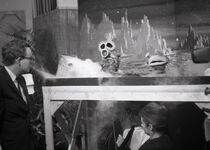 Jerry Juhl, Don Sahlin and Jane Henson on The Today Show in 1963 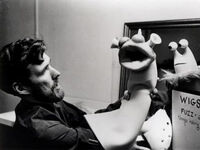 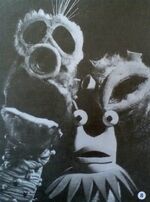 Retrieved from "https://muppet.fandom.com/wiki/Sclrap_Flyapp?oldid=1287864"
Community content is available under CC-BY-SA unless otherwise noted.