Scooter serves as a "gofer" backstage on The Muppet Show, and appeared from the first produced episode through the end of the series. Possessing glasses with eyes embedded in the lenses[1] and generally wearing a green track jacket, Scooter is a vaguely humanoid character of unknown heritage (as cited in Of Muppets and Men,[2] when pressed about his family, he explained that his mother was a parrot but he didn't know about his father).

Although occasionally seen in production numbers, his primary role lay in the backstage plots. From the second through the fourth seasons, Scooter appeared in the opening, acting as call boy and delivering a brisk "15 seconds to curtain" to the guest star. (For the final season, Pops handled the guest star introductions.) According to The Muppet Show Style Book, Scooter is about 14 years old.[1]

Scooter's position at The Muppet Theatre is as general aide and gofer ("...I'll go fer coffee; I'll go fer sandwiches; I'll go for anything you need...")[3] Although initially hired because his uncle, J. P. Grosse, owns The Muppet Theater, Scooter holds on to his job through both nepotism and efficiency. Scooter had been around since the first (production) episode, but his proper introduction, including his hiring and identification as J. P. Grosse's nephew, occurs in episode 106. Scooter's family connections served as a running gag, especially during the first season.

In addition to Scooter's regular job as a gofer, he has also appeared on-stage. He often sang in group numbers or as part of the background chorus, as well as singing some solo numbers, including "Six String Orchestra" and "There's a New Sound".

Scooter also took part in some of the theatrical sketches that were performed on The Muppet Show. In episode 323, in the Muppets production of "Robin Hood", he did double duty, playing the role of Alan-A-Dale in addition to working as stage manager. In episode 506, he played the role of the son in the "Jabberwocky" sketch (as part of the larger Alice in Wonderland play).

Additionally, Scooter took over hosting duties in episode 308, when Kermit accidentally got on an in-service train from the railroad station where the show was being performed. One notable episode for Scooter is episode 419, in which Scooter leads the others in a correspondence course, "How to Be a Superhero". On occasion, Scooter has helped Miss Piggy in her attempts to get Kermit to become romantically interested in her. These attempts include telling Kermit that Avery Schreiber and Miss Piggy are a couple, bribing the audience to applaud for Miss Piggy (or, as Scooter said, "go hog wild"), and tricking Kermit into signing a marriage license before performing in Miss Piggy's supposedly "staged" wedding.

In episode 320, Scooter sold backstage passes to some of Sylvester Stallone's female fans. This action angered Kermit, who wanted to have a talk with Scooter. As Kermit introduced Sylvester Stallone, Scooter took the opportunity to get the girls to convince Kermit that they were desperate to see him rather than Stallone; this maneuver is an example of Scooter using his ingenuity rather than his family connections to get out of a tight spot.

While others were often unappreciative of Fozzie Bear's jokes, Scooter usually liked them and the two often did acts together. These included musical duets such as "Simon Smith and His Amazing Dancing Bear" and "On Her Doorstep Last Night", and comedy acts like "The Telephone Pole Bit".

In episode 109, Scooter was temporarily Gonzo's manager. He renounced when Gonzo ate the contract.

Scooter has appeared in a number of television specials. In the 1981 special The Muppets Go to the Movies, he played Porthos in The Three Musketeers, and the Scarecrow in The Wizard of Oz.

In The Muppets: A Celebration of 30 Years, he introduced a montage of guest star clips, saying that his favorite Muppet moments are those with the guest stars.

In A Muppet Family Christmas, he found an old film strip of the very first Christmas that the Muppets had ever spent together.

In The Muppets at Walt Disney World, he was paired with Bean Bunny. He got a few opportunities to make some cute jokes about Bean.

Scooter has also appeared in The Muppets Go Hollywood, John Denver & the Muppets: A Christmas Together, The Fantastic Miss Piggy Show, Rocky Mountain Holiday, and The Muppets Celebrate Jim Henson. He also hosted the 1985 video compilation Children's Songs and Stories and made appearances in Fozzie's Muppet Scrapbook and Rowlf's Rhapsodies with the Muppets.

In The Muppet Movie, Scooter is the road manager for Dr. Teeth and the Electric Mayhem. In The Great Muppet Caper, he's a resident of the Happiness Hotel. In The Muppets Take Manhattan, he graduates with the other Muppets, and briefly works as a movie theater usher.

In Muppet*Vision 3D, Scooter hosts the preshow film, addressing the queue audience and trying to keep order backstage while Kermit gets things ready in the auditorium. Scooter does not play a significant role in the movie itself, but makes a cameo appearance, riding a bicycle with Janice.

After an eight-year absence, Scooter made his first new appearance in Muppets from Space, first during the "Brick House" number, and later, selling Gonzo t-shirts. In It's a Very Merry Muppet Christmas Movie, it's revealed that if Kermit wasn't born, Scooter would have been a cage dancer 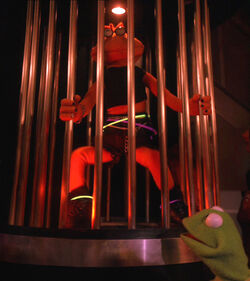 . And in The Muppets' Wizard of Oz, he plays the assistant to the Wizard.

In 2011, Scooter appeared in the film The Muppets, returning to his role as the resident "gofer". Scooter takes the threat to Muppet Studios to heart. "I'm stage manager of the Muppet Theater," explains Scooter. "I try to help Kermit save the studio, 'cause without a theater and stage, there's really not much for a stage manager to do."[4]

Scooter gets to play a new role in the movie - as host - when, in a pinch, Kermit calls on Scooter to fill in for him on stage. Unfortunately, the classic advice Scooter gets to calm his nerves - pretend that the audience is naked - doesn't necessarily work for him.

Scooter also appeared in the sequel Muppets Most Wanted, again filling in as host when Kermit (actually Constantine) faints onstage, as well as performing "Moves Like Jagger" with a group of penguins.

Baby Scooter appeared in Piggy's dream sequence in The Muppets Take Manhattan, and he later was a featured member of the Muppet Babies animated series. The Baby Scooter seen on Muppet Babies was redesigned as a brainy, computer-knowledgeable child and he was given a tomboyish twin sister named Skeeter.

On the ABC series The Muppets (2015), Scooter serves as the talent coordinator for Miss Piggy's late night show Up Late with Miss Piggy.

Here, Scooter's personality is modified to more of a square, nerdy man-child. This change allowed performer David Rudman to further develop the character beyond his classic Muppet Show persona. Before production on the series began, Rudman suggested removing Scooter's Muppet Show jacket and giving him a wardrobe change inspired by comedians like Fred Armisen and David Wain.[5][6] In most appearances from the series onward, Scooter's regular attire consists of a hoodie with a plaid shirt and/or a t-shirt. In the presentation pilot, Scooter wore a Hawaiian shirt.

A running gag with Scooter's "swear words" begins in "Pig Out" where Scooter describes to Piggy how he doesn't ever want to live through another moment like the time Kermit "said 'good grief' like ten times in a row." Other "Scooter Swears" include "Fudgcicles", "Jeepers, this is Golly Swell", and "Heavens to Betsy". Scooter's naïvety is still present in the show, as witnessed in "Walk the Swine" in which Scooter gets into a wreck with Rizzo the Rat and consistently takes bad suggestions for insurance and car repair from Rizzo's relatives.

In "The Ex-Factor", it is revealed that Scooter still lives with his mother, and also has a distaste for her new boyfriend Ken. Also in this episode, it is revealed that Scooter--in search of a way to "get out and party"--frequently goes to Color Me Mine (a pottery/painting workshop), where he takes Kermit to help him make a gift for Denise. Despite Kermit's best efforts, Scooter makes constant judgments on his skills and ends up throwing both of Kermit's attempts into "The Whoopsie Bin". It is even more to Scooter's chagrin when Rizzo and Pepe start going in order to pick up women.

In "Too Hot to Handler", Scooter confesses that he's had a crush on Chelsea Handler ever since he "switched the TV up to the naughty language channels" and discovered her, instantly becoming, "pardon my naughty language--Smitten." He proceeds and succeeds to ask Chelsea out on a date, but runs home when she gets "way too physical, way too fast" (kisses him). They later meet up and Scooter explains that he needs a much slower relationship, to which Chelsea agrees.

In "Going, Going, Gonzo", Scooter feels a need to get some adrenaline in his life and live it to the fullest after seeing Gonzo fly amongst the overhead cables and lights backstage, thus making Scooter realize how fragile life is. He goes to get guidance from The Electric Mayhem, where Janice suggests piercing his ear--and proceeds to do so. At the last moment, however, Scooter leaps from his seat and tosses Animal around when he tries to hold Scooter down. Scooter feels guilty about it, but the band finds delight in it and says Scooter can come hang out with them anytime.

Scooter's disgust for Ken is further explored in "Single All the Way" where he comments that Ken has very long fingernails, comparing him to a Spanish guitar player.

After Kristin Newman's creative retooling, Scooter's "mama's boy" persona was dialed down. The only time after the first 10 episodes Scooter talked about his mom and her boyfriend was "Little Green Lie" where he says he's available for laser tag because, if he stays home, he has to watch his mom and Ken practice active listening. In "Because... Love" Scooter reveals that his biological dad skips his birthday party each year because, according to Scooter's therapist, he's a pathological narcissist.

Scooter features prominently on Muppets Now for Disney+, where every episode is shown from the perspective of his computer. He is tasked with uploading the various shorts to the streaming platform, typically being interrupted by his fellow Muppets for a myriad of reasons.

He also appears as the announcer and rule keeper for "Pepe's Unbelievable Game Show," constantly flummoxed by Pepe's inability to keep the show in any consistent format.