The Scooter Action Figure was released in the third series of The Muppet Show action figures produced by Palisades Toys as part of the show's 25th anniversary marketing campaign. He has a detailed Muppet Show logo on the back of his jacket.

The skateboard has a pin so it fits into Scooter's foot.

When this figure was first announced, it was planned to come with a clipboard, a headset, and a to-be-determined pack-in figure. The headset and pack-in were soon dropped from Scooter's release. A dressing room door was also considered as an accessory, but it was eventually decided that a door would be too big to fit in the normal packaging and be in scale with Scooter.[1] 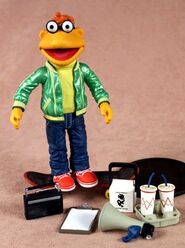 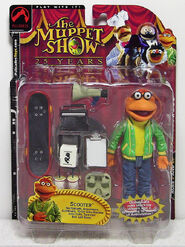 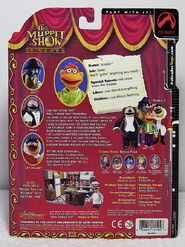 Retrieved from "https://muppet.fandom.com/wiki/Scooter_Action_Figure?oldid=1288868"
Community content is available under CC-BY-SA unless otherwise noted.