Scouting is a worldwide youth movement of multiple organizations for both boys and girls whose aims are to develop young people physically, spiritually and mentally so that they may take a constructive place in society. This is achieved by emphasizing outdoor activities and youth leadership. Scouting started in England in 1907; today Scouting has more than 28 million members and exists in more than 216 countries and territories (all but six countries worldwide are involved in the Scouting movement).[1] The American versions of the program are The Boy Scouts of America and Girl Scouts USA.

Jim Henson was a Cub Scout. As a child, the den meetings were held at his house, with his parents serving as Den leaders.

Chapter four of the book Jim Henson: Young Puppeteer, entitled "Cub Scout Projects with Puppets", describes Henson's time as a Cub Scout in some detail. The book shares an extended story from Henson’s Scouting experience in which each of the Scouts in Henson's den was challenged to come up with, and carry out, a major project of his own invention. Henson, with the help of fellow Scout Gordon Jones, developed a distinctive comedy act. Jones told stories with his hands behind his back, while Henson, crouching behind Jones, supplied the latter's arm gestures by extending his own arms through his fellow Scout's armpits. The act was an instant success and showed Henson's early creative thinking, along with his tendencies to explore the boundaries of creative performing and puppetry techniques. Due to the response to Henson's hand act, the following year Henson was asked by the new Den leaders to help organize and lead the entire den in putting on a puppet show. Henson got the entire den involved in putting on the show, and many of his fellow Scouts say Henson "got his start working with puppets in Leland’s Cub Scouts". Although nobody recalls what the shows, which featured homemade puppets, were about, everyone remembers the games that Jim and the Scouts played when they had free time.[3]

Richard Hunt was also involved in the Scouting movement; he was a Boy Scout while growing up in Closter, New Jersey. According to Jane Hunt, Richard would bring some of his puppets (which he'd bought with money earned through his after-school paper route) to Scout meetings and put on shows for the troop.[4] 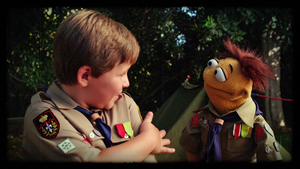 Gary and Walter in the Junior Pioneers of America. 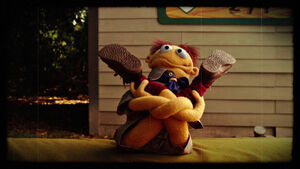 Walter earning his Yoga badge.
Add a photo to this gallery 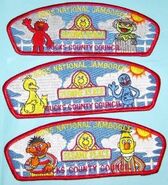 Patch variants for the 2005 National Jamboree 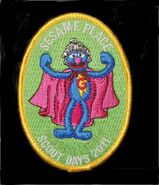 The following individuals, in addition to their work with the Muppets/Henson, served as scouts.

Wikipedia has an article related to:
Scouting
Retrieved from "https://muppet.fandom.com/wiki/Scouting?oldid=1231493"
Community content is available under CC-BY-SA unless otherwise noted.