Scudge is one of the monsters who tries to steal Christmas in a sketch with Arthur Godfrey on The Ed Sullivan Show. He is a green monster, with a long red nose and bright green eyes.

This puppet later appeared in monster skits in Sesame Street's first season, with large pink eyelids added and his arms removed. He appears as a female character in two early game show sketches: as the mother of Billy Monster in "Can You Guess" and as Mrs. Trudy Monster in "The Mr. and Mrs. Game," in both cases wearing a wig and, in the latter case, a necklace.

He also appeared in The Muppet Show: Sex and Violence in his Sesame Street get-up as part of the audience in the wrestling match. 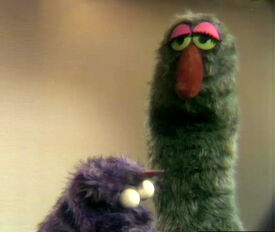 Scudge, as seen on Sesame Street. 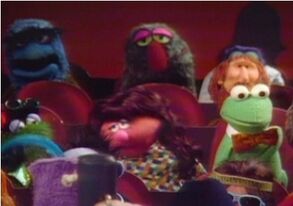 Scudge as part of the audience in the wrestling match in The Muppet Show: Sex and Violence.