Elmo and the Bookaneers was a live Sesame Street stage show that ran at SeaWorld Orlando from April 2 through Labor Day, 2007.[1]

Playing at the theme park's Bayside Stadium, the show features Elmo, Bert, Ernie, Cookie Monster, Abby Cadabby and other characters "in an adventure involving pirates and books." The production featured special effects, SeaWorld animals, and action on the stage, in the lake, and in the sky. 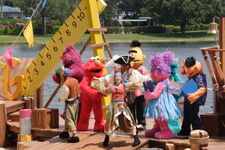 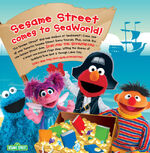 Print ad for the stage show.

In the show, Abby Cadabby and her friends — Elmo, Cookie Monster, Rosita, Grover and Oscar the Grouch — search for the key to a magical talking treasure chest. Along the way they encounter many strange and magical items — including a singing tree, a rhyming rock, and a shouting toucan. 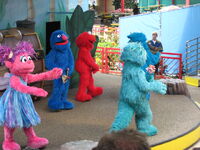 Big Bird's Beach Party stage show, originally presented at Sesame Place until 2009, is performed at SeaWorld San Antonio. In the musical show, the Sesame Street characters join together to help Telly overcome his fear of water. 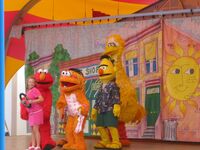 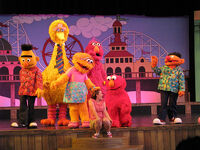 A Sesame Street Christmas is a Sesame Street stage show that debuted at SeaWorld theme park in Orlando, Florida in December 2009. The characters featured in the show are voiced by their regular performers with the sole exception of Ernie, voiced by Billy Barkhurst.[2]

The show was also performed at Busch Gardens' England section in 2010 and 2011.