In episode 107, the staff of KMUP is frantically trying to keep the show's ratings up in order to stave off the Mad Bomber. At one point, Gonzo and Zippety Zap run into the control room with videotapes of Muppet Babies (official Jim Henson Video release Let's Build) and Seinfeld (home recorded episode), respectively, hoping that airing these shows will help the ratings. However, when the two accidentally crash into each other, their tapes combine into "Seinfeld Babies."

The sketch parodies the Seinfeld episode "The Contest," in which the four main characters place a bet to see who can go the longest without "treating his [or her] body as if it were an amusement park." Kramer is the first one to lose. The episode, which first aired in 1992, famously revolved around a taboo sexual subject without mentioning the subject by name.

In the "Seinfeld Babies" sketch it inspired, Baby Jerry wonders why their parents talk about changing them when, even after they've been changed, they're still the same. Once the babies find out what changing really means, they have a contest: whoever can go the longest without a diaper change wins the contest. Baby Kramer is the first one to lose. 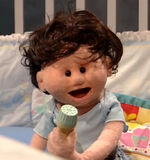 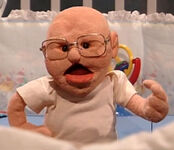 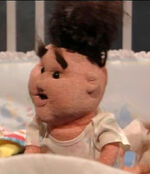 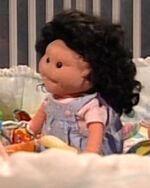 ElainePerformer: Leslie Carrara-Rudolph
Add a photo to this gallery
Retrieved from "https://muppet.fandom.com/wiki/Seinfeld_Babies?oldid=1099684"
Community content is available under CC-BY-SA unless otherwise noted.