Selma Worm is the name used by a chicken in Sesame Street Episode 3697 so that she could try out to be a worm astronaut for WASA. Although she doesn't make the cut, Selma travels to Sesame Street for the launching of the Wiggleprise. Somehow, she finds herself in the bottommost compartment of the ship, which initially hinders the lift-off. Luckily for the crew, Snuffy sneezes (provoked by the ship's smoke), and gives the vessel the extra boost needed to take off into space. A farmer (Joey Mazzarino) arrives at the last moment and sees that his chicken is on board, but no one else notices.

On the Moon, Selma bounces along the surface without the aid of a space suit or breathing apparatus. When it's time to leave, the ship again can't accommodate for its weight to efficiently achieve lift-off. This time, with no Snuffleupaguses around, her own sneeze from the base of the ship is enough for the ship to break free from the lower gravity on the moon.

Upon her return to Earth, no one believes that she was a part of the mission, but she proudly marches in the celebratory parade anyhow. As she makes her way home with the farmer, she expresses a desire to lay eggs on Jupiter. For this last appearance, she was performed by Peter Linz.

The same puppet was used for Henrietta and any number of nameless background chickens on Sesame Street. 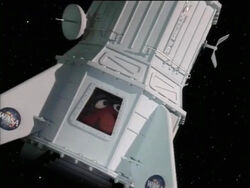 "Selma Worm" hides out on the WASA spacecraft... 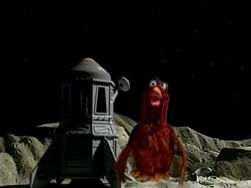 ...and bounces on the Moon.
Community content is available under CC-BY-SA unless otherwise noted.
Advertisement