Sesame Amigos is an American-based spin-off of the Spanish-language series Plaza Sésamo that debuted on Univision on August 1, 2015. The first season consists of 26 half-hour episodes.

The series is a compilation of Sesame Workshop and Sesame Street mini-shows, including The Furchester Hotel, Bert and Ernie's Great Adventures and "Cookie's Crumby Pictures" (all dubbed into Spanish).

The series' theme song is an instrumental version of "Elmo's Song." Each episode features a series of framing scenes starring Elmo, Lola, and Rosita, as well as their interactions with real kids. Also featured are Word of the Day pieces featuring Elmo and celebrity guests.

In 2016, the series began airing in Latin American markets, rebranded as Sésamo and taking the place of Plaza Sésamo. 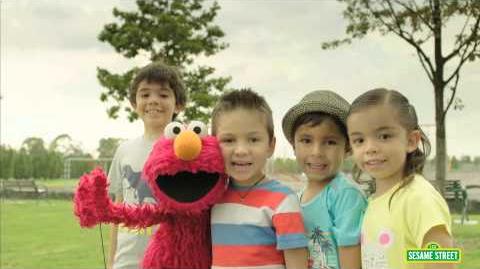 Retrieved from "https://muppet.fandom.com/wiki/Sesame_Amigos?oldid=1099726"
Community content is available under CC-BY-SA unless otherwise noted.