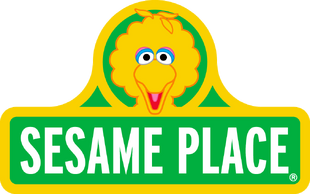 Sesame Place is the official Sesame Street theme park located at 100 Sesame Road in Langhorne, Pennsylvania. First opening in 1980, the park is operated by SeaWorld Parks & Entertainment and is developed in cooperation with Sesame Workshop. The 16-acre park consists of water attractions, rides, shows and interactive entertainment, along with walk-around versions of the Sesame Street Muppets. Special events, including appearances by the Sesame Street cast, are held at the park as well.

Currently the park encompasses 16 acres, employs a staff of over 1,500 and is home to more than 30 rides, shows and attractions. However, the park began in 1980 as a small 3-acre theme park with just over 100 staff and very few attractions. The original park featured play areas and large computer labs where visitors could play educational video games and use basic art programs. Walk-around characters would not appear until years later.

The original plan for the park was developed by Children's Television Network, Jim Henson and his team, and Busch Entertainment Corporation (now SeaWorld Parks & Entertainment).

“It was important for us to understand the trends of the theme park industry and introduce innovative additions that reflected the Sesame Street brand. When Sesame Place first opened there were no water rides. Sesame Neighborhood, the replica of Sesame Street, was only a concept. Even the characters weren't here until three years later. In fact, I remember Grover making a grand entrance by helicopter!”

Sesame Place added Sesame Neighborhood, a replica of Sesame Street in 1988. The neighborhood is the nation's only fully functioning replica of the street.

Over the years, water rides were added to the park, the first being Slippery Slopes. The park grew as a water park, adding more than 15 water rides, slide, playgrounds and pools. A large and elaborate lazy river, called Big Bird's Rambling River, opened in 1990. Twiddlebug Land's Sky Splash, the park's biggest water slide, opened in 1995.

In 1997, the park began investing in more "dry" rides. Although the park had several playgrounds and stage shows, the park was primarily a water park. In 1998 the park opened Vapor Trail, a Super Grover-themed roller coaster. Big Bird's Balloon Race and Grover's World Twirl, two other dry rides were added in 2002. In 2006, the park opened Elmo's World, a new area themed around the Sesame Street segment of the same name. Elmo's World opened with three new rides.

"Neighborhood Street Party", a choreographed musical parade replaced "The Rock Around the Block Parade" in 2010. The parade is held twice a day at the park. Additionally, new live stage shows have been introduced repeatedly throughout the years; including the currently running "Elmo Rocks!", "Let's Play Together!", and "Elmo the Musical Live!". A new area, Cookie's Monster Land, opened in May 2014. In 2018, the park added another roller coaster, Oscar's Wacky Taxi.

On October 21, 2019, it was announced that a new Sesame Place theme park would open in San Diego, California by Spring 2021, by way of retheming the previously existing Aquatica waterpark.[1]

The park is home to more than a dozen characters from Sesame Street who wander around the park greeting guests, in addition to appearing in shows and parades. Occasionally the characters sport different outfits and attire depending on the occasion, including formalwear, beachwear, safari attire, hipster threads or just their traditional garb.

The first characters to appear in the park were actually animatronic figures, who debuted in 1981. Cookie Monster appeared out of a cookie jar at the Sesame Street Food Factory dining area, and an animatronic Oscar the Grouch had his own mobile junk cart, which could be moved around to multiple locations. Frank Oz and Caroll Spinney recorded dialogue for the characters, who would talk and sing.

Walk-around characters first appeared in 1983, starting with Ernie, Bert and two Honkers (Green and Pink). The characters appeared in "The Bert and Ernie Show", which was performed in front of Mr. Hooper's Emporium from 1983 to 1984.

Big Bird joined the cast in 1986, debuting in the "Big Bird & Company" show staged at the Big Bird Theater. Cookie Monster was added to the park in 1987, and two characters debuted in 1988: Grover and Prairie Dawn. A new Purple Honker arrived in 1989.

The cast expanded in 1992 with the introduction of Elmo and The Count. The three Honkers were retired after the 1992 season. When Twiddlebug Land opened in 1993, Tessie and Thomas Twiddlebug appeared as walk-around characters, and they stayed in the park until 2000. 1994 saw the addition of Telly Monster, Rosita, and Oscar the Grouch. Oscar originally appeared as a puppet before making the transition to walk-around character in 2012. Further introductions included Zoe in 1996, Barkley in 2004, Baby Bear in 2005 (retired in 2018), Abby Cadabby in 2007, Murray Monster in 2011, a Dinger and a new purple Honker in 2014, Julia in 2018 and Mr. Snuffleupagus in 2019.

List of characters, with the year of their debut 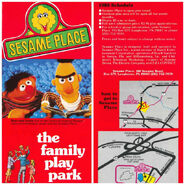 A promotion for the 20th anniversary of the amusement park from 2000.