Muppet Wiki
Register
Don't have an account?
Sign In
Advertisement
in: Non-fiction Books, Sesame Street Behind the Scenes, Companion DVD

Sesame Street: A Celebration - 40 Years of Life on the Street 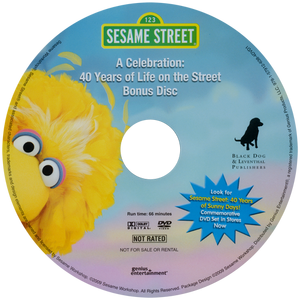 Sesame Street: A Celebration - 40 Years of Life on the Street is a 2009 book celebrating the 40th season of Sesame Street. The book tells the behind-the-scenes story of the show, and profiles the people and puppets who have created this cornerstone of children's television. The author, Louise Gikow, has written for Sesame Street and worked as Editorial Director and creative consultant at Jim Henson Productions.

A smaller abridged version of the book was included with the 40 Years of Sunny Days DVD box set which was released on the same day.

The book includes a bonus DVD with the first episode and a timeline montage. The first episode is presented the same way as it was in Old School: Volume 1, complete with introduction by Bob.

The following clips are featured, most of which were in the same timeline which accompanied TV airings of The Street We Live On: