The coins were housed in a hard plastic, air-tight capsule to protect the proof surfaces from tarnish and fingerprints. The capsules were housed in gift boxes with colorful inserts. The front of each coin depicts a Sesame character; the reverse has an anniversary logo.

The characters that were minted were: Bert, Ernie, Big Bird, Cookie Monster, Grover and Oscar the Grouch. 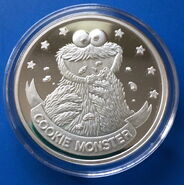 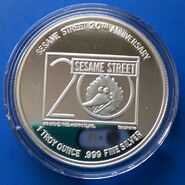 Retrieved from "https://muppet.fandom.com/wiki/Sesame_Street_20th_Anniversary_coins?oldid=1163991"
Community content is available under CC-BY-SA unless otherwise noted.