Sesame Street Cast Tours were live performances by the Sesame Street cast. In the early years of the show, the cast would regularly tour around the United States, performing live for audiences of preschoolers.

The first Cast Tour ran from August 31 to September 14, 1970, to promote the second season, which began airing in November. The 40-minute show featured Gordon, Susan, Bob, Mr. Hooper and Big Bird (played by Danny Seagren). As the CTW's internal "Sesame Street Newsletter" reported, the cast "performed at two shows in Harlem's Apollo Theater before kicking off the national tour in September before a crowd of 15,000 at San Francisco's Golden Gate Park (where a reporter described the event as a 'preschooler's Woodstock')." The tour moved on to Los Angeles, Toledo, Detroit, Cleveland, New Orleans, Atlanta, Baltimore, Washington, D.C., Boston, Newark and Philadelphia.[1]

After a 1971 stop in Chicago, Reverend Jesse Jackson described the cast as "beautiful."[2] 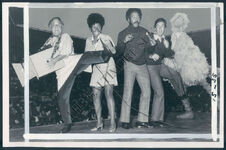 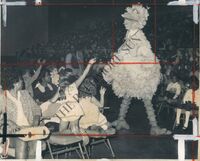 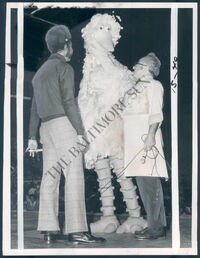 Retrieved from "https://muppet.fandom.com/wiki/Sesame_Street_Cast_Tours?oldid=1227027"
Community content is available under CC-BY-SA unless otherwise noted.