The Sesame Street Circus Playset was released by Illco in the early 1990s. After Illco was acquired by Tyco, the playset was also released under the Tyco label.

The playset consists of a circus wagon which, when opened, reveals a circus arena. Included are various circus stage accessories, animals (a horse, a seal, an elephant, a tiger and a lion) and three PVC figures: Big Bird as a ringmaster, Ernie as a clown and Cookie Monster as an animal trainer, holding a hoop.

A later release of the set included two extra figures, Bert and Elmo, as audience members. 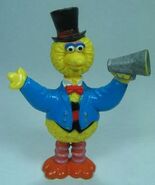 Big Bird as the ringmaster 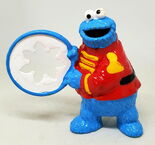 Cookie Monster as an animal trainer
Add a photo to this gallery
Retrieved from "https://muppet.fandom.com/wiki/Sesame_Street_Circus_Playset?oldid=1110665"
Community content is available under CC-BY-SA unless otherwise noted.