In the early 1990s, toymaker Illco released a 27 piece Sesame Street Farm playset. After Illco was acquired by Tyco the toy was also released under the Tyco label. The playset was based around a barn with a silo on a green base. A crane was attached to the hayloft. There were also two bales of hay, a trough, a tractor, a truck, some fence pieces, a horse, a cow, two pigs, and a sheep. The set included 5 PVC figures: Ernie, Bert, Big Bird, Grover, and Barkley. 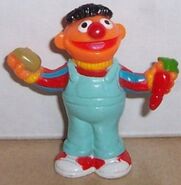