The most commonly seen criminal on Sesame Street is Lefty, a shady-looking salesman in a trench coat, who appeared in several recurring Sesame Street sketches discreetly selling hot items to passersby (usually Ernie). Lefty spoke in a whispery voice as he attempted to unload such boosted items as the letters U and O, an invisible ice cream cone, and even exotic elephant artwork. These sketches can be found on Lefty's own page. Lefty's boss (a Fat Blue Anything Muppet performed by Jerry Nelson) appeared in a few sketches with his lackey, often in a dark alley or abandoned warehouse after dark. Though not named in the sketches, scripts identify the character as "Mike."[1]

With Lefty and his boss phased out of the show by this point, a new group of criminals who secreted their own secret knock appeared in season 6. The group was comprised of Benny (a Green AM performed by Richard Hunt), Lefty (a Fat Blue AM performed by Jim Henson) and their boss (a Lavender AM performed by Jerry Nelson). 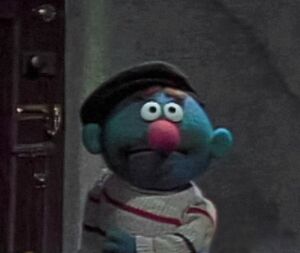 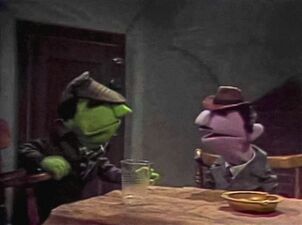 Benny (left) and his boss (right).