Sesame Street High Flyers is a Sesame Street game made in 1988 by LewCo. The plastic "game base" is a stand with spaces for 12 cardboard figures of Sesame Street characters. A small air pump can be attached to any of the 12 holes around the game base. On each player's turn, they spin a spinner, which indicates the character they're hoping to collect. They attach the air pump to one of the holes in the game base, hit the pump with their fist, and see which character flies into the air. If the launched character is the one that they were aiming for, they keep the character; the object is to collect the most characters by the end of the game. 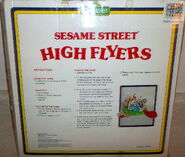 Add a photo to this gallery
Retrieved from "https://muppet.fandom.com/wiki/Sesame_Street_High_Flyers?oldid=1152161"
Community content is available under CC-BY-SA unless otherwise noted.