In this video from 1990, Big Bird gets sick so Maria takes him to the hospital. At first, Big Bird hates it there, even getting angry at Maria for taking him there. However, by the time he's well, Maria has a hard time getting him to leave.

Two new songs appear in the video: "Busy Getting Better All the Time" and "You Gotta Be Patient (To Be a Patient)." 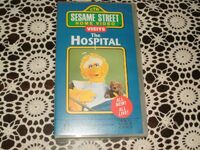 Australian VHS release
VDI
Add a photo to this gallery

Retrieved from "https://muppet.fandom.com/wiki/Sesame_Street_Home_Video_Visits_the_Hospital?oldid=1197821"
Community content is available under CC-BY-SA unless otherwise noted.