Big Bird's Musical Jack-in-the-Box is a Sesame Street toy made by Questor in 1976, under the Child Guidance label. Big Bird pops out of the three-story jack-in-the-box, representing the 123 Sesame Street brownstone. 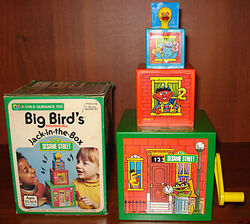 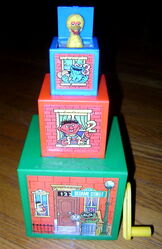 In 1982, Questor was acquired by CBS Toys, who made a new Big Bird Jack-in-the-Box under the Child Guidance label. In this version, Big Bird is pictured playing the accordion, and the box plays "Row, Row, Row Your Boat". 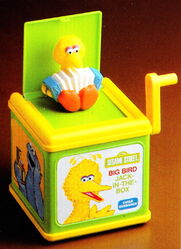 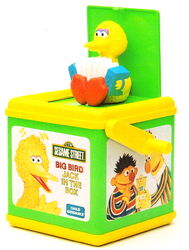 Hasbro acquired CBS Toys, and produced another Sesame Jack-in-the-Box toy in 1986. Big Bird plays a guitar in this version, and sits in his nest. The box plays "Pop Goes the Weasel". The decorated sides show Bert playing a fiddle, Ernie in a straw hat holding a microphone, Big Bird playing a banjo, Oscar the Grouch playing a flute, Grover playing a bass, and Cookie Monster playing the cookie jar jug.

In 1997, this toy was the one-millionth item sold on eBay, and was pictured on an eBay pin released in 2005, to celebrate the website's 10th anniversary. Said toy now sits in the main lobby of eBay headquarters in San José, California. 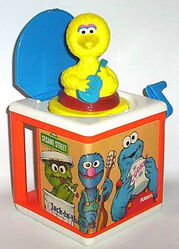 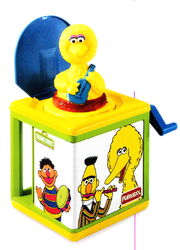 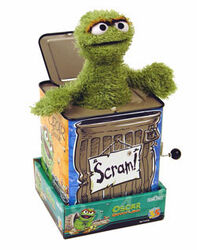 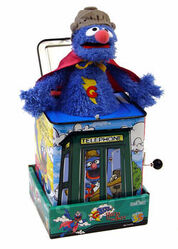 Super Grover
Add a photo to this gallery
Retrieved from "https://muppet.fandom.com/wiki/Sesame_Street_Jack-in-the-Box_toys?oldid=1173661"
Community content is available under CC-BY-SA unless otherwise noted.